From Open Transactions
Revision as of 16:29, 7 August 2014 by GuilhermeSalgado (talk | contribs) (Move a paragraph to the section where it belongs)
(diff) ← Older revision | Latest revision (diff) | Newer revision → (diff)
Jump to navigation Jump to search 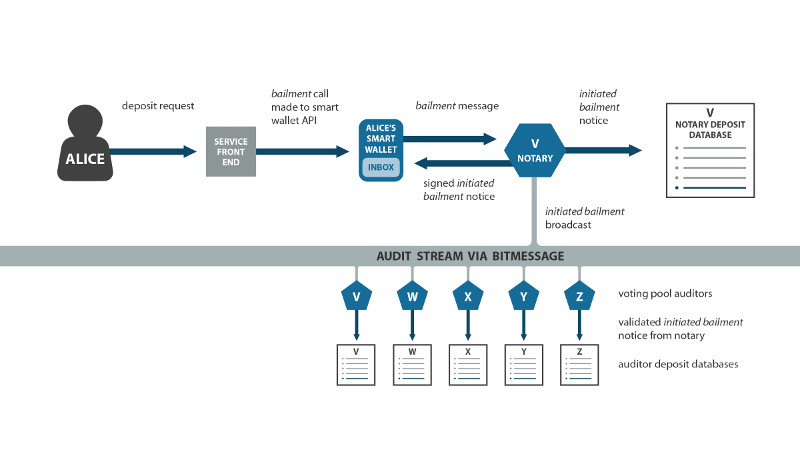 Customers will normally request a deposit address by interacting with the service front end web site or some other software application. When the service receives such a request,  it notifies the OT client via the OT client API function: request_bailment.

When the OT client receives notice of a user desire to deposit funds to a voting pool, via any method, it sends a bailment transaction request to the transaction server to initiate the deposit process.

The transaction server validates this request, and replies with a signed receipt. A copy of this receipt is broadcasted to the audit stream, and another copy is stored inside an initiatedBailment notice that’s placed in the user’s inbox. The transaction server adds this association to a deposit database for future reference. 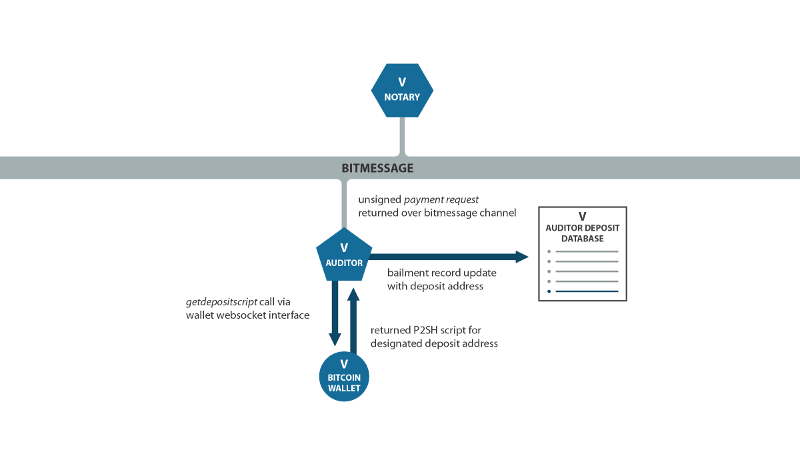 The wallet calculates and returns the designated deposit address as P2SH output script. The audit server uses this information to update the deposit database, and to assemble and sign a PaymentRequest. 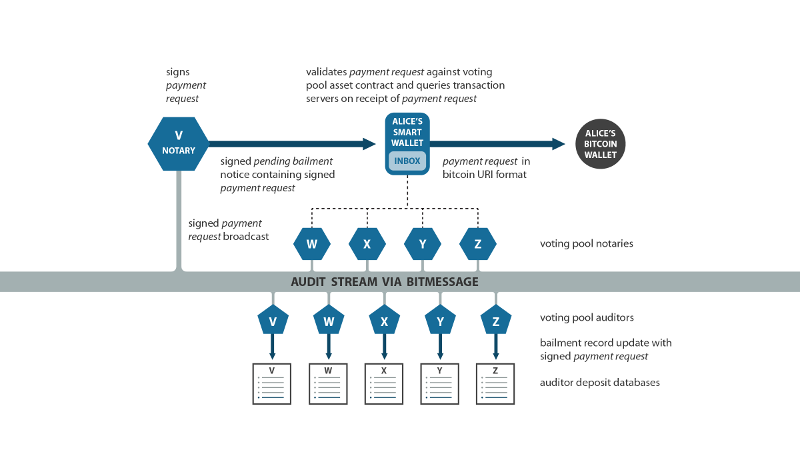 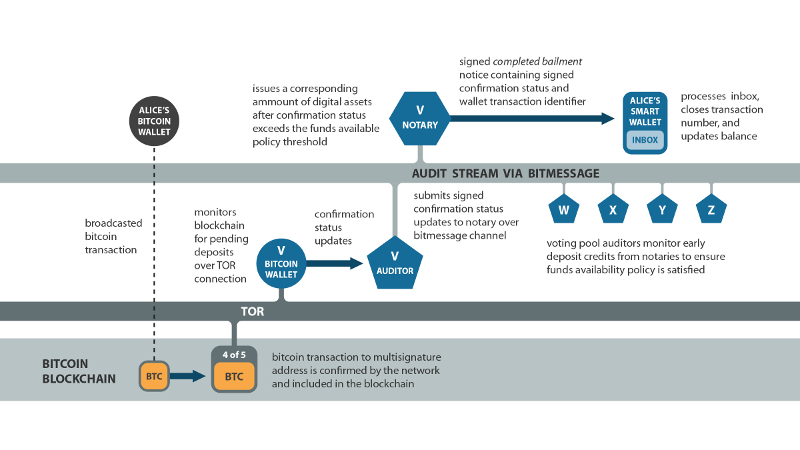 Type 1 Event - Fraudulent Deposit Address
A malicious or hacked operator may give the customer an invalid PaymentRequest in an attempt to steal deposits.

Each pool member’s Bitcoin wallet must notify its audit server of any deposits received to an address which the pool controls. When an incoming transaction is received to an address the audit servers are expecting due to previously broadcast PaymentRequest, they will use the getinfomultisigwalletaddress calls to identify the incoming transaction, and gettransactionstatus to monitor its confirmation status.

Type 1 Event - Unknown Deposit
A deposit may be received to an address which has never been used, and for which a PaymentRequest was never created so no member of the pool knows to which nym it should be credited.

Type 1 Event - Duplicate Deposit
A deposit may be received from an address which has been previously used, so the audit servers know to which nym the address is assigned.

The size of the deposit may be below the network dust threshold (small enough that it would require more in transaction fees to spend than it is worth).

The audit servers in the pool must monitor all deposits to ensure the Funds Available Policy is satisfied to avoid the risk of a double spend or chain fork causing insolvency. Any server which offers more early deposit credits than what it can cover with its service account must have its audit status set to degraded.

Type 2 Event - Non-credited Deposit
The transaction server fails to place a completedBailment notice in the user’s inbox after a successful Bitcoin transfer.

If an initially-seen deposit fails due to a chain fork, and if the user has not yet been credited with an OT receipt for the deposit, the status of the deposit remains pending. The audit server should notify the transaction server by setting the number of confirmations back to zero. In the typical case of blockchain reorg event, the deposit transaction should re-enter the mempool automatically and the wallet can assist with this by rebroadcasting it.